When last I wrote, I was heading back to Newfoundland for a house sit in Holyrood, about 45 minutes drive from St. John’s. A house sit was necessary for me to have somewhere to live.  Other people are staying in my house, which essentially leaves me homeless – but in the best kind of way. Friends and family offered me accomodations, but as the wise Benjamin Franklin said, ”Guests, like fish, begin to smell after three days”.  I’d like to keep my friends, thank you very much.

The West Jet flight landed in St. John’s and as there is nothing better than being met at the airport by people you love, I had the best homecoming – my daughter Becky, her boyfriend Michael and a few minutes later, my best friend Pat. The only one missing was my other daughter, Katie, but she was in Ottawa waiting on her own flight home as she’d been away on a band trip with the Newfoundland Symphony Youth Orchestra.

Do you know what joyful pain feels like?  It’s the kind that comes from embracing someone or being embraced so tightly that the breath is squeezed out of you and your ribs are crying for mercy. It’s where you try and invoke every ounce of longing and joy and love into your first encounter with those you’ve missed the most.  I was on the giving and receiving end of both.

The next six weeks were spent house sitting for the owners while they were on vacation and pet sitting Sally Ann, their extremely independent Manx cat who doesn’t warm up easily to people and who lives her own life on her terms – like most cats, humans are there merely to make her feline life more agreeable.  The house is an extension of it’s owners – their love of the sea, sailing and Newfoundland apparent in every nook and cranny. Numerous bookshelves hold countless books – mostly nautical, local authors and Canadian literature.  The kitchen resembles the galley of a boat – long, slim and efficient, with everything with arms reach.  The floors are clad in lovely mahogany wood reclaimed from vessels long since left the ocean waters. A hammered copper sink is the focal point of the downstairs loo. Upstairs, two proper portholes and a ships wheel were the first things that caught my eye, but the view beyond of the harbour coming into Holyrood captured my attention. And when I stepped out onto the back patio and could breathe in the salty air and hear the cries of the seagulls, the ebb and flow of the waves rolling up onto the beach only yards away from where I stood, I knew that I was going to love every moment here.

The first few days were spent unpacking and getting to know where everything was.  It isn’t easy living in so many places in a short period of time.  Just as you get comfortable and know the workings and the ‘quirkings’ of each place, you are off to a new one – and you become confused as to where things are. Extra bathroom tissue is not always kept in or near the bathroom. Clothes pins are often hidden in the strangest places as they are seasonal, like inflatable pools and snow shovels. As to remote controls – the number of devices and their degrees of complexity vary from 1-10. A 10 for either is very unnerving!  But like all places I go, in a few days I have things sussed out and shifted around to fit my own comfort level. The hard part comes when trying to remember where to put them back before I leave.

Sally Ann, the above-mentioned cat, quickly showed us who was boss.  She slept all day, roamed all night, would only take treats from a certain stool in the TV room and was finicky about her food requirements, even though I’d mixed and stirred and put them in a big dish to small dish order (not required, but I thought it couldn’t hurt).  I hollered her name from the patio and she did not come. I blew her whistle until my cheeks tingled and my ears popped, but she did not surface.  But when I’d walk around the corner of the house or walk along the side of the bed, she’d pop out sideways and scare the ‘bejeezus’ out of me (and for those who know me well, extreme hyperventilation ensued).

She has a complicated series of cat doors and tunnels leading from the basement to the upstairs that she navigates with ease, enabling her to go in and out of the house whenever she felt like it.   My second night there, I heard ear splitting meowing in the kitchen.  Minus slippers, I sneaked half way down the stairs only to see the kitty munching away on her array of food, swishing her long stripy tail back and forth.  Wait a minute – Sally is a Manx cat – she doesn’t have a tail! In full attack mode, I hissed and yelled, launched myself at the feline thief, thereby successfully chasing a neighbourhood stray out of the kitchen, through the cat maze and screeching out over the back lawn.  I was warned it might happen.  Fueled by adrenalin, I raced upstairs to put my slippers then padded down into the basement to block off the cellar cat door, thereby shutting off all free entry to independent cats wanting a midnight snack.  Unfortunately this included Sally.  She was not pleased, not by a long shot. She glared at me from underneath the garden bushes. She refused to come via my ‘cat calls’, vigorous whistle-blowing or even bribery (treats left on the back step).  The kitty was still in control and only ventured her haughty self through a doorway if I was nowhere nearby. 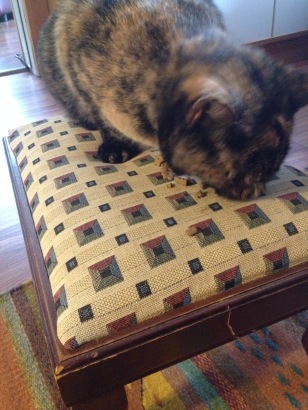 The treat stool – don’t all cats have them? 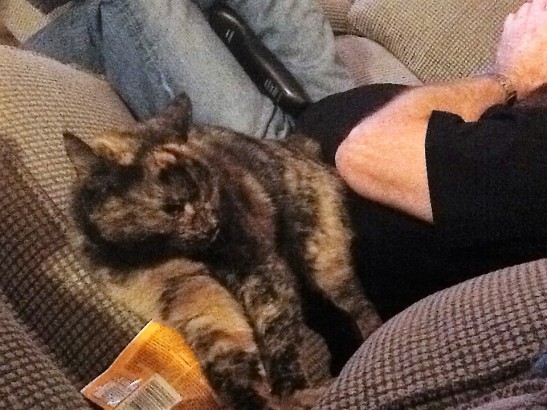 Sally Ann – her treats and her human

Eventually she forgave me – by the time we left, she was wrapping her lithe self around our ankles, taking treats from our fingers, waiting for us at the front door when we’d return home and even stretching out next to us as we watched CBC news at night.  Dare I say it- she may have grown to like us.

The house was set at the end of a lane next to the water, the bay of Holyrood a beautiful backdrop.  When I was growing up in Campbellton, I spent countless hours sitting on a rock by the waters edge watching the waves lap against the shoreline, dreaming dreams only a 13-year-old could, writing fantastical stories and letters to nobody in particular. It was my safe place, my haven.  Being here next to the ocean brought back those same feelings of belonging and comfort.  Sometimes I’d take my coffee cup, maybe my pen and notebook and just sat on a rock, taking in all the sights, sounds and smells of this beautiful place.  Other times I scoured the line of ocean detritus left by the retreating waves, searching for bits of green and blue sea glass, sun bleached shells, smooth pieces of porcelain or that perfect stone.  I never returned empty handed.  I always brought something back –  in my hand, in my notebook or in my memory. One afternoon we sat and watched a whale rise to the surface, over and over.  It was close enough for us to hear each time it exhaled, before slipping back into the waters depths. We waited, just listening and watching until we knew it was gone.

The weeks flew by at a breakneck pace.  There was so much to get done in a short amount of time before heading off to Ontario for the rest of summer.  Prioritize, prioritize became my daily mantra.

Numerous appointments to doctors, lawyers and banks with papers to sign and forms to fill out; telephone calls to sort out insurances, bills, address changes and cell phone issues. And so on, and so on… all the usual bits most people deal with on a weekly basis, but compacted into short spans of time for me for obvious reasons.

Attending a local book club and meeting the most wonderful ladies (and one man). One meeting in the St. Joseph’s Town Hall library  and the other at The Stone Jug in Carbonear. Walking along the wild and breathtaking Mad Rocks Trail in Bay Roberts. Surprise dinner at The Tea Garden in Holyrood – magnificent view, incredible food, fabulous service and wonderful company. A windy but wonderful walk through Salmonier Nature Park.  The magnificent view George Cove Mountain  in Holyrood.

Supper out and a James Taylor concert with best friends where the concert was fabulous, but the supper experience…well, I won’t elaborate.  High school graduation shopping with Katie to put finishing touches on her outfit and laughing our way through shops for stuff we would never be caught dead in.  Stolen moments with the girls for coffee or a quick browse in Chapters.  Late night suppers and long overdue chats with Becky while stretched out on the couch next to the fire.

Cooking, laughing and reminiscing with Becca and Kathryn (and their mom Liesa), two young ladies I used to take care of when they were little girls – they are working on their Duke of Edinburgh Award programme. 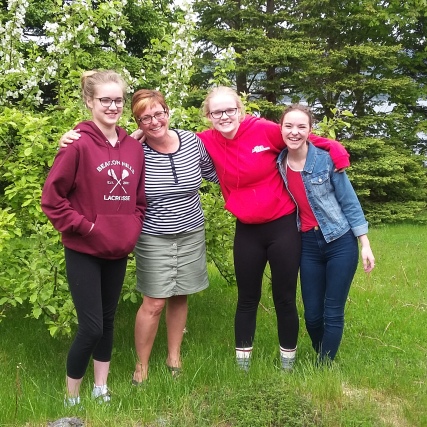 Kathryn, me, Becca and Katie 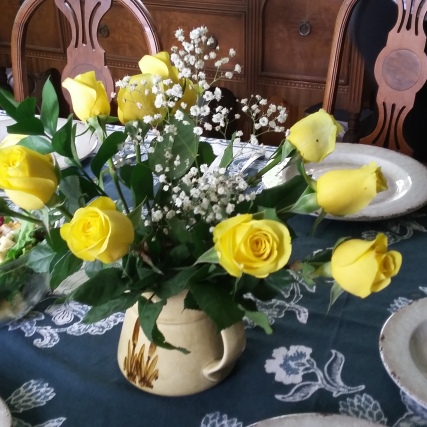 Yellow roses from Becca and Kathryn gracing our table.

Sitting with Pat in hospital waiting rooms and doctors offices as she prepared for the worst but came out with a sigh of relief and a whole new outlook on her life – and we discussed every aspect of it into the wee hours of many nights.  Seeing my Mom for the first time in over a year and forming a different kind of relationship than we’ve ever had, where we were now two adult women finding our unique way in this world.

Watching Katie, my youngest daughter, now a confident young woman, as she prepared for and attended her high school prom (Holy Heart of Mary 2016).  Poised and beautiful, she was surrounded by so many people that had loved her and encouraged her for the past 18 years.

It’s hard to believe how time slips by

The future becomes the past in the blink of an eye. 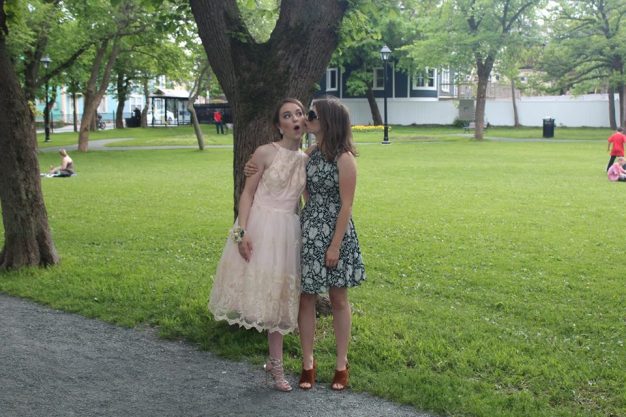 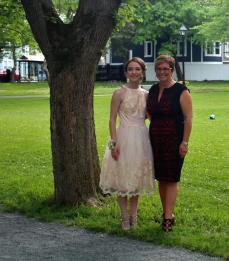 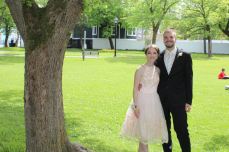 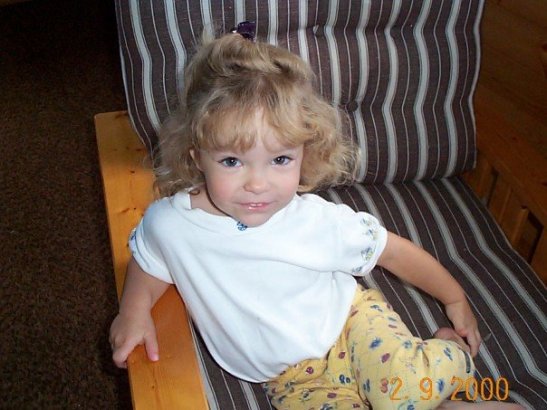 Katie (2) at her Nanny Mary’s cabin 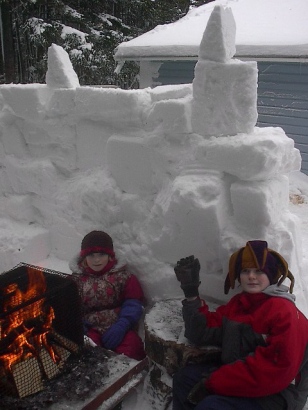 Katie and our neighbour Isaac 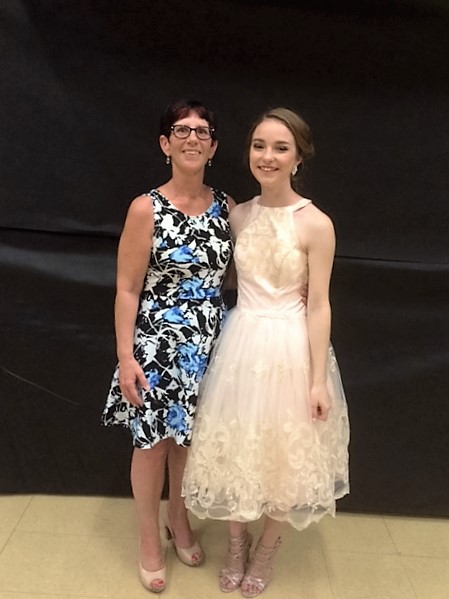 Katie and her ‘other mother’ Pat – AKA Best Friend Ever

Time flies and I didn’t get to do all I had planned. I tried to make my way through my list of things to do and people to see, but like all lists, not everything was checked off and I sincerely apologize if anyone felt slighted in any way. I did do my best. I’ve already begun to make a list for my next visit back – let me know if I can add your name. I’m looking forward to it.

glimpses from a sole perspective