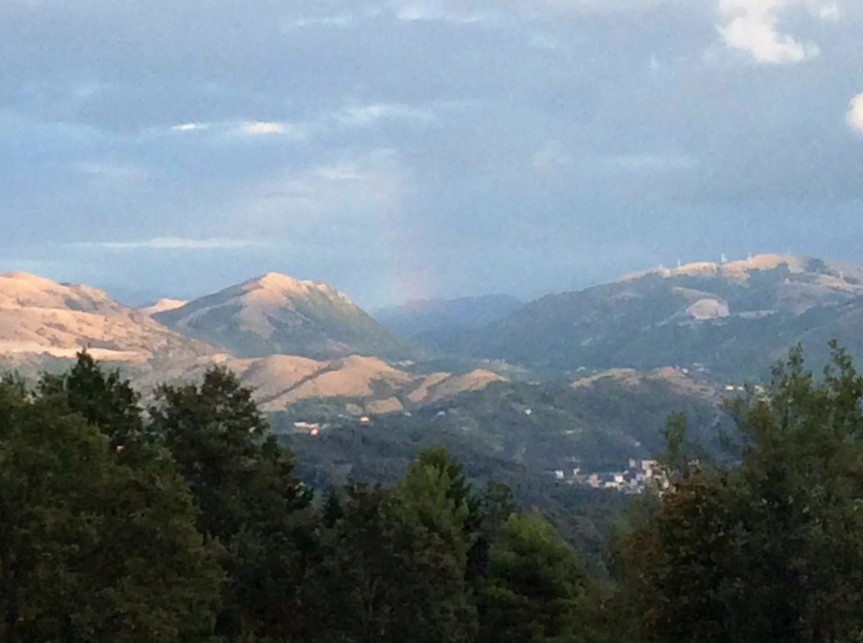 It is very early in the morning, the sun just cresting over the Italian mountains.  The air is cool and damp, as is the grass beneath my feet. Maybe from the dew, but more likely from the rain we had last night.  An ironstone bowl holding a partially burned mosquito coil is half full of water.   I have forgotten my sweater, so I wrap my arms around my body in an attempt to keep warm and hold back the shivering.  There is hardly a breath of wind, but I can see the top leaves of the fig tree gently moving in some elusive breeze and I feel its cool path as it brushes over my damp toes.

The world is a jewel in the early morning light.  Diamonds glitter where the dew has formed on the grass.  Emeralds shine as the rising sun filters through the leaves of the castagna (chestnut), noce (walnut) and fico (fig) trees and the kiwi vines, the greens changing from dark to light, transparent to opaque. 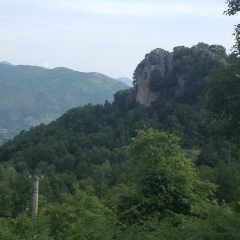 Down through the valley, the opal mists shift and move as they hide one moment and reveal in the next the town balanced on the adjacent hillside, shades of purple, pink and grey in the rising sun.  And that same rising sun turns the upwardly jutting cliff on the right from cold black to an amethyst grey. 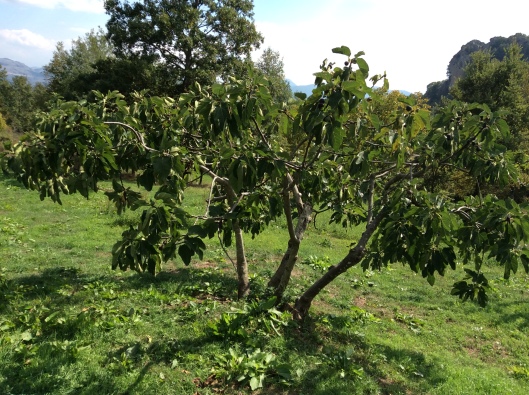 Fruit on the fig tree

I breathe deeply the smells of the grass and dirt and fading roses. Another breath brings added layers of smells and tastes – sage, the green stalks of tomato plants, dampness and rotting wood.  I let my eyes wander deliberately over everything in front of me, trying to take it all in and hold it in my memory forever, but I know I will forget most.  That is why I write – to capture some of the immediacy of a moment all too quickly lost. 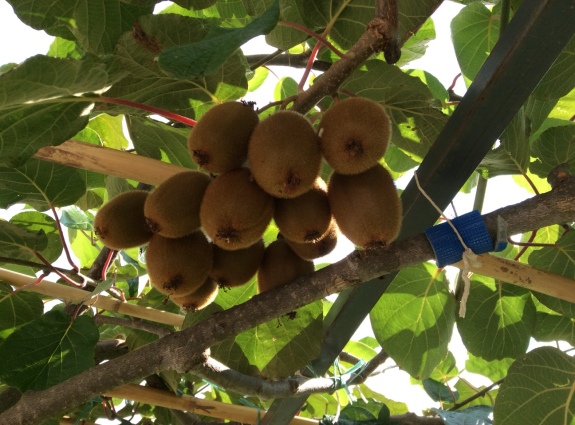 Kiwi fruit on their vines 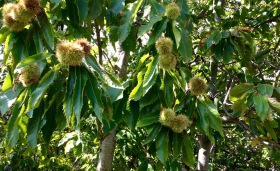 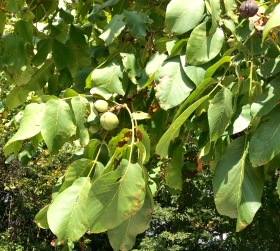 Tomatoes on the vines

I dare not walk any further in the grass with my bare feet.  A few days ago I saw a long black snake slither by here, making its way over the terrace, through the grass and between the stones surrounding the herb garden.  Yesterday I almost stepped on what I thought was a baby snake, brown, shiny and smooth in the leaves.  It turned out to be a slow worm, which is actually a lizard. If I had trod on it, it probably would have dropped it’s tail and escaped as many lizards do.

And all around me is music – the music of these mountains.  Early morning songs from birds  I cannot begin to recognize.  During the day the birds chirp, twitter, caw and squawk as they stake their claims to ripe fruit and protect their nests. In the evening the hooting of a lone owl lulls me to sleep.  The sound of breezes lifting and falling over the mountain as they flit and move thorough the trees, over red tiled rooftops, slipping in between cool mountain crevices and across the garden.

And then there are the bells.

Not the big church bells that are so symbolic of Italy, but the coarser, simpler bells of the livestock that roam the countryside.  Throughout the mountains of Italy, many of the sheep, goats and cows wear bells as they roam the countryside grazing, making them easier to locate should they wander off.  The bells can be made of brass, copper, iron and bronze and are attached to the animals by collars made of leather and curved wood. The sound each one makes vary depending on the metal used and weight of the bell itself and of the clapper inside.   The sizes of the bells vary too, depending on the size of the animal, it’s gender, age or even whether or not a female is pregnant.  Sometimes a special goat or cow might wear a more elaborate bell, painted or etched or a shaped differently.  This could denote the animal as being a great milk provider, herd leader or even acknowledge its superior stud ability.

The real beauty of these bells lie, not in their function, but in their music.  It is lovely to waken every morning to the muted ringing sounds as the animals move about and graze in the woodland pastures. Their music is continuous.  Notes change and tempo varies.  Beats and rhythms adjust according to the animal’s movement.  The clarity of the sounds alter depending on whether the cows and goats are underneath the canopy of the trees or out on the open grassy patches. Underneath the umbrella of the leaves the sound is gentler, but it gains strength and clearness in the open. Dynamics change with the surroundings- an early morning mist mutes their song, but the echoes off the rock face and through the valley gives them definition, making them seem closer than they are.  Sometimes the melody is punctuated with barks and yips from the herd dogs or the staccato shouts of the herders keeping the cows and goats together, but for the most part, the only accompaniment are the calling of the animals themselves,  the changing wind, the rustling leaves and birdsong. 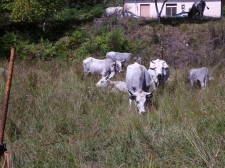 Members in the orchestra pit

Even at night, the melody never stops – it just slows, quietens and becomes a lullaby.

So for days and nights, I am surrounded by this beautiful highland symphony.  It does not follow a written score.  Not scripted or conducted, not following intricate time signatures or complex chord progressions. Yet the air is full of sweet music that is the musical score of these mountains, music that could not be written down note by note.   A one-time performance of a masterpiece that will resonate with me for a life time.

Its encore has yet to be written.

Curiosity guarantees a life of learning

Glimpses from a Sole Perspective